This website has received several queries from freelance journalists owed money by the Irish Examiner, asking what they could do.

This afternoon I spoke to the receiver at KPMG dealing with The Thomas Crosbie Holdings (TCH) receivership of the Irish Examiner and other titles.

In brief, I was told that freelance journalists are unsecured creditors, and will not be paid. Quite simply, there will not be any money left over after other creditors higher up the food chain are paid. 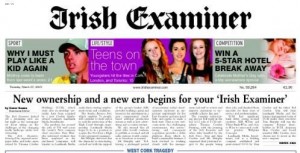 So is that the end of the story? Maybe.

If your work is particularly valuable, and the Examiner wants to use your work again in the future, you may be able to negotiate some payment on outstanding amounts, in part or full. If nothing else, the Examiner – and other titles n the former Thomas Crosbie Holdings group – have a moral, if not a legal obligation to the freelance journalists who have helped produce their titles every day.

The NUJ is currently in discussions on these and other issues with the Examiner and Sunday Business Post and other titles. For further information, NUJ members are encouraged to contact the Irish office of the NUJ. To begin, send an email to info@nuj.ie with your contact details.

UPDATE: Further information on help if you are owed money by the Sunday Business Post.

1 comment for “Does the Examiner group owe you money?”