Brian Pelan is the editor of VIEW magazine. This article is based on his presentation at Freelance Forum 2012 on 24 September 2012.

My partner Una Murphy and I started up the online VIEW magazine in 2012. 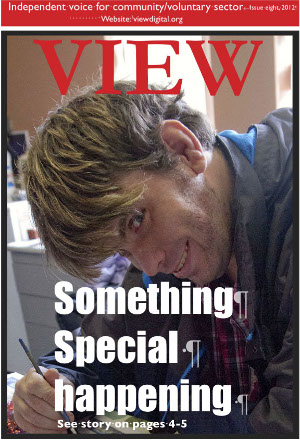 I have worked at a variety of national and regional titles in the UK and the Republic for more than 20 years. After taking voluntary redundancy from the Belfast Telegraph in 2011, I decided to set up an online magazine which would target the community and voluntary sector in Northern Ireland.

The process was in the development stage for nearly one year. During that period, Una and I took part in numerous meetings, including going to Stormont, talking to trade unions, the private sector and a range of voluntary and community groups.

The purpose of this market research was to see if there would be an audience for VIEW.
After getting a positive reception, I launched the publication in January 2012. Since then eight issues of VIEW has been produced.

Income for the magazine is derived from paid advertisements. Readers subscribe to the publication for free.

VIEW carries a range of stories and images on a variety of issues, including hard news stories, human interest features and comment articles. A mobile app version of the magazine is in the development stages.

The longer-term vision for VIEW is to produce jobs for journalists.

Anyone thinking of going into online journalism must ask themselves two questions:
1, Is there a market for my publication?
2, How will my publication produce an income?

Feel free to contact me at brianpelan@viewdigital.org for any further questions you may have.

← The European Press Prize
From Belief to Unbelief →