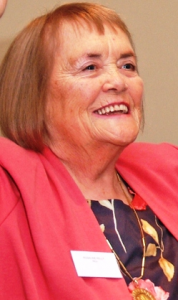 Ms Kelly worked as a magazine journalist in London and served as President of the NUJ from 1975 to 1977. On retiring from active journalism she returned to Ireland. She lived in Co Wicklow and was instrumental in establishing the retired members section of the NUJ in Ireland. She was a member of Dublin Freelance branch.

NUJ President Barry McCall described Ms Kelly as one of the best known figures within the NUJ.

Mr McCall said: “Before the phrase ‘glass ceiling’ was coined Rosaline Kelly was setting a headline for woman activists. She was elected to the union’s National Executive Council in 1972 and quickly established a reputation for commitment, energy and a direct debating style which was to become her hallmark.

Rosaline had a long association with the NUJ Standing Orders Committee and was regarded as an expert on procedures. She had a strong commitment to the welfare of members and this was reflected in her deep involvement in the union’s charities and in the establishment of a retired members section in Ireland. She never lost her enthusiasm and only ill health prevented her from attending our delegate meeting in 2012. It would have been her 50th consecutive delegate meeting. Rosaline Kelly was an NUJ institution and her passing will be mourned throughout the union.”

She said: “Rosaline Kelly was one of the outstanding characters within the NUJ. She retained throughout her life an abiding commitment to the principles of social justice. Rosaline was fiercely proud of the NUJ and took particular pride in the Code of Conduct. Rosaline believed in the highest professional standards and was a strong supporter of our work at the Leveson Inquiry. Decades after her retirement from journalism she was sharing her advice and wise counsel. Her presence at union gatherings will be greatly missed.”

Séamus Dooley, Irish Secretary expressed sympathy on behalf of the Irish Executive Council. He said: “Rosaline spent her working life in England but in retirement she became active in Ireland, becoming the voice of retired members and ensuring that their interests were represented at all times. With the former Irish Secretary Jim Eadie she led the way in ensuring that retired members continued to play a role. She will be remembered for her style, her humour and her forthright manner. Rosaline disliked the term ‘woman president’ but there is no doubt she was a role model for women in a male dominated industry. Her integrity, her selfless dedication and her commitment made Rosaline a role model for all union members and it’s for those qualities that she will be remembered.”