Voices for Free Speech
Hungarian Journalists are not Alone!

The National Union of Journalists in Ireland invites you to Assemble outside the Hungarian Embassy, (2 Fitzwilliam Pl, Dublin 2)

To add your voice to the calls on the Hungarian Government

Call as well on the EU Commission, the Irish and other EU governments to demand the Hungarian government to respect its international commitments to freedom of speech.

Over a thousand Hungarian journalists have been laid off in the past year, mostly as a result of an outright attack on trade union rights. Colleagues at the Hungarian national broadcasting service have undertaken a symbolic ‘rolling hunger strike’ where they take turns to go without food in protest against state censorship. It’s part of a growing resistance to the policies of a government which has simply shredded human rights law.

When Viktor Orban’s Fidesz coalition government came to power in a landslide on 25 April 2010, it mounted a fundamental attack on civil liberties including trade union rights. Fidesz apparatchiks were put in charge of the courts, the national bank and, of course, the national broadcaster.

Censorship of the airwaves reached infantile proportions late last year when the face of a critical judge was pixillated out of a broadcast report. His body was seen, but not his face (presumably for reasons of spite). TV journalist and union leader Balazs Nagy-Navarro protested and was fired. He and some other colleagues then went on a symbolic hunger strike which lasted 22 days. Their strike is now being carried on by others. Under this pressure, Fidesz has relented a little. The official mainly responsible for the censorship has been disciplined but the overall censorship project remains and the hunger-strike continues.

Last month, the authorities withdrew the broadcasting license of Klubradio, an independent radio station critical of government policy. Thousands of Hungarians including trade union and civil liberties leaders took to the streets on 22 January to protest.

In addition, Orban’s government has played a dangerous game with the fascist-style Jobbik party. It isn’t part of his government but he encourages its rampant anti-Semitic and anti-Roma activities.

Government policy culminated at New Year, in a new constitution which seriously restricts Hungarian democracy, especially for lesbians, gays and anyone living outside the ‘nuclear family’. Orban sought to celebrate this with a lavish event in the Budapest Opera House on 2 January 2012. Crowds of over 70,000 people turned out all right – to protest against Fidesz. The party’s popularity has dropped from over 57% at the time of the election to 18% last month.

Orban can to a certain extent ignore this domestic opposition because, among his ‘reforms’, is a wholescale gerrymander in favour of his party. However, what he can’t ignore is the EU Commission upon which his government depends (just as ours does) for financial assistance.

EU officials have criticised his undemocratic activities, but not to the extent of making the restoration of democratic norms a requirement. Brussels has already forced the Hungarian government to renounce direct control of the central bank, a breach of its international obligations. But a country’s international obligations to freedom of speech are no less important and need to be just as vigorously defended. 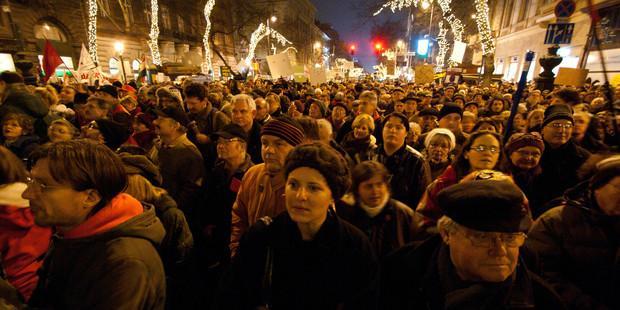 ← Media diversity: Speech by Pat Rabbitte
How to deal with plagiarism →