Armagh Pipers Club, the traditional music teaching organisation, has two major fundraising initiatives under way. It is organising a benefit concert in Dublin’s Liberty Hall Theatre, where many of the biggest names in Irish music are coming together on Saturday 20 January. The Club is also selling a painting donated by its founder, the renowned Armagh artist J.B. Vallely. The painting, The Living Tradition, features the classic Vallely theme of three traditional musicians, and was created especially for the Pipers Club. While the original will be sold at auction or to a private buyer, there is a single limited edition of 50 high-quality numbered and signed prints, most to be sold exclusively by the Club with six to be won as prizes in a draw to take place at the Dublin concert.

The Club, a recognised charity, receives only limited grant aid towards its teaching programme, which provides over 50 classes per week to over 200 students who come from eight counties, and its annual international piping festival, which brings thousands of visitors to Armagh every November. The Club’s treasurer, Thomas Smyth, said: “We are very grateful to our two major donors, the Arts Council and Armagh City, Banbridge and Craigavon Borough Council. However the core running costs of the organisation – staffing, premises and so on – are not covered by any grant aid and it remains as much of a struggle to keep the Club afloat as it has been since its foundation in 1966. Many local businesses help us out with sponsorship of the William Kennedy Piping Festival, and we receive other donations from time to time, but we hope that these two big projects will provide a major boost to the Club’s finances.”

The concert on the 20th, sponsored by the trade union SIPTU and private donors, features a number of successful musicians whose careers started in Armagh Pipers Club, and others who were keen to show their support for the Club’s work. They include the Armagh-born flautist Brian Finnegan, piper Tiarnán Ó Duinnchin from Monaghan, the legendary singers Andy Irvine and Len Graham, and the Máirtín O’Connor Trio comprising the accordionist, fiddler Cathal Hayden and guitarist Seamie O’Dowd. Cork-based singer Karan Casey will be performing, as will the supergroup Lúnasa, which includes Armagh-born Cillian Vallely, and the band Buille, featuring Vallely brothers Niall and Caoimhín. The rising folk singer Daoirí Farrell completes the concert line-up.

Given the stellar cast, the concert tickets are very reasonably priced at €25. Pipers Club chairman Éamonn Curran explained that the democratic ethos of the Club obliged it to keep the cover charge low, in line with its policy of charging well below cost for its weekly classes. “The Club exists to keep our musical heritage alive and thriving, and accessible to everyone. Over the past 52 years it has trained literally thousands of musicians in a very wide range of instruments. Fundraising is always a challenge for a very small organisation, especially in this tough economic climate, so we hope that the concert and the painting, as well as bringing in much-needed revenue, will raise our profile and inspire some philanthropic sponsors to come forward!”

Tickets for the concert and the draw, and copies of the print, are available exclusively from armaghpipers.com. 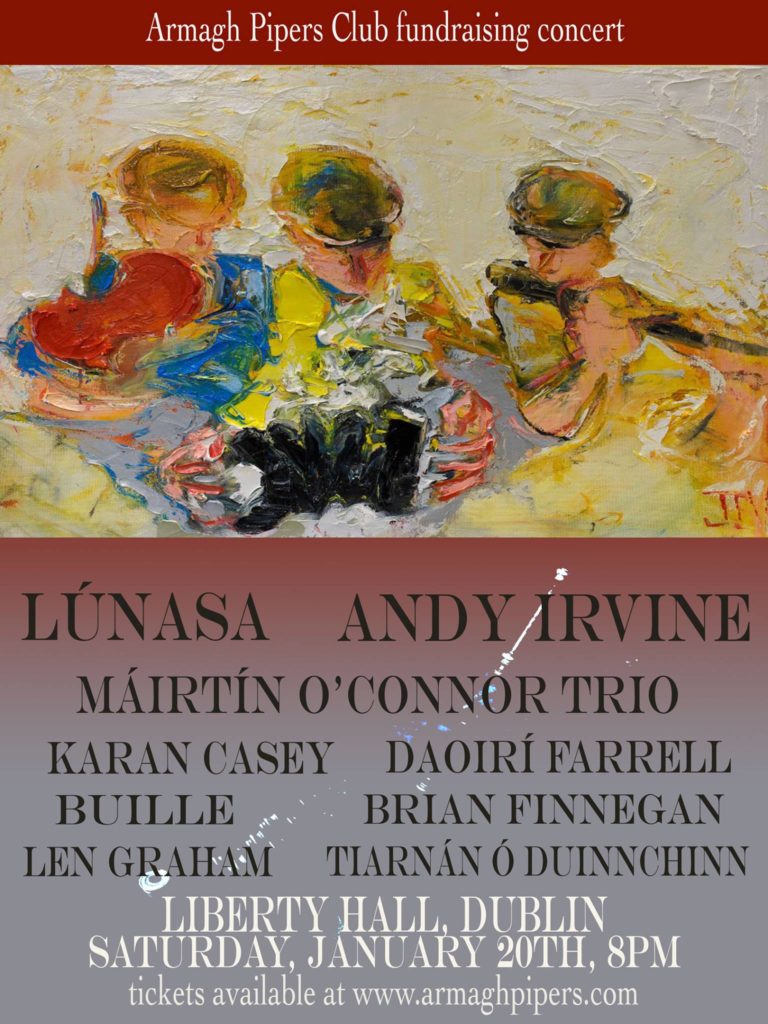